Nutrition-related issues contribute to 4 out of 10 top risk factors for diseases and mortality in Kenya. Poor maternal health and child care practices form the basis of the malnutrition problem, with 38% of children exclusively breastfed and only 1 in 5 children receiving a minimum acceptable diet. Children under five suffer the most: 26% are stunted, 26.3% anaemic, and a massive 81.6% zinc deficient. 4 out of 10 women of reproductive age are anaemic and 79.9% are zinc deficient.

Furthermore, a double burden of malnutrition exists with 4 out of 10 adults being overweight and/or obese. The rate of diet-related non-communicable diseases continues to rise in Kenya.

These conditions are the result of diets low in fibres and high in sugar, fats, and salt, coupled with a lack of access to healthy, diverse foods and inadequate health services. Amongst the general population, consumption of vegetables, milk, fruits and legumes is relatively low compared to the consumption of sugar-sweetened beverages and dietary cholesterol. Gender inequality in food distribution within households has largely contributed to an increase in girls suffering from malnutrition, stunting, wasting and infectious diseases.

This public health challenge is further exacerbated by economic instability. About 40% of the population is poor, 32% live below food poverty line with more people in the rural areas than urban areas. Households and individuals whose monthly food consumption expenditure per person is less than Ksh 1954 (USD 19) in rural and peri-urban areas and less than Ksh 2551 (USD 25) in core urban areas respectively are particularly affected.

To address these challenges, the Government of Kenya has developed a strong legislative and regulatory framework aimed at protecting and advancing good nutrition. GAIN is committed to working closely with the Kenyan Government to find innovative solutions to strengthen the country’s food supply chains and ultimately improve access to nutritious foods for its most vulnerable populations.

GAIN has been contributing to improving the nutritional status of Kenyans since 2010, with an initial focus on supporting the Government of Kenya to introduce the fortification of maize flour, wheat flour and edible oils. Since then, working in alliances with other partners, we have made fortified staple foods available through support to over 20 large-scale millers, reached over 350,000 children, and worked with over 60 food businesses to increase their ability to improve consumers’ access to nutritious diets. We have also worked extensively to increase awareness among vulnerable populations, in different parts of the country.

1 in 4 adults are overweight and/or obese

81% of children under 5 have zinc deficiency 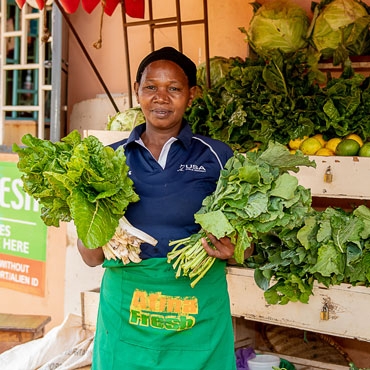 GAIN works with local businesses to ensure production and supply of nutritious foods to low-income consumers. 34 companies have been supported with grant and technical assistance in order to increase availability and affordability of nutritious foods. In addition, more than 40 small and medium-sized companies received support from GAIN in areas such as basic nutrition principles, food standards and compliance, food safety, market entry, entrepreneurship, financial management, and strategic business management. 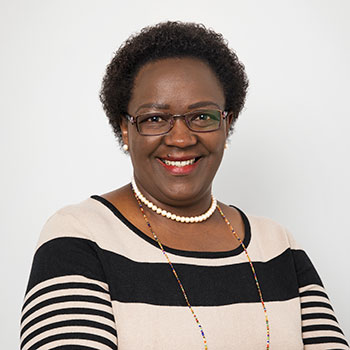 As the Kenya Country Director for the Global Alliance for Improved Nutrition, Leah provides organizational leadership and management for effective delivery of food systems programs that address malnutrition in Kenya.