GAIN’s Executive Director Dr Lawrence Haddad and Dr David Nabarro, of Imperial College London and 4SD, have been awarded the 2018 World Food Prize at a ceremony in Des Moines, USA. “The 2018 laureates’ work significantly improved nutrition for mothers and children in the critical first 1000 days of life”, stated the World Food Prize Foundation.

The award to two champions of the critical role of nutrition to human health and development cements the growing awareness of the fundamental importance of healthy diets to the Sustainable Development Goals (SDGs). It represents the first time that the leading global food prize award, founded in 1986 by Nobel Peace Prize winner Dr Norman Borlaug, has given such prominence to the challenge of not just feeding but nourishing the world.

“Nutrition is a maker and a marker of development; it is fundamental to survival and brain development,” said Haddad. “If you are malnourished as a very young child, your body, your brain, and your immune system are shaped differently; that affects you for the whole of your life, it affects entire nations, and it cascades down generations”, he added.

David Nabarro has a lifelong service in global public health, leading the Scaling Up Nutrition (SUN) Movement from its inception in 2010 to 2014, following which he was appointed UN Special Envoy for Ebola. “There are around 1 billion people in the world with undernutrition: obesity and excessive intake affect well over 1 billion more”, said Nabarro. “Malnutrition has profound long-term impact both on individuals and their societies.”

Nutrition is a maker and a marker of development; it is fundamental to survival and brain development.

In the decade since the food price crisis of 2017, there has been a significant shift to prioritising good nutrition in reducing hunger.

45% of under-five mortality in Africa and Asia is due to malnutrition and undernutrition is thought to have caused almost 2 million cases of tuberculosis last year. It is estimated that for every USD 1 a developing country spends on nutrition, it can expect to see USD 16 in economic returns. Today, nearly sixty countries are giving higher priority to nutrition in national plans within the context of their involvement in the SUN movement.

The role of unhealthy diet in driving increased rates of heart disease, type 2 diabetes and cancers is increasingly recognised. Haddad and Nabarro have helped put good nutrition firmly at the heart of development.

They said: “We are committed to seeing a greater focus on people’s nutrition within communities, governments, businesses, schools and universities everywhere. The long-term damage caused by inaction is too great”.

The Prize was founded in 1986 by Nobel Peace Prize winner Dr Norman E. Borlaug and is the foremost international award recognising the achievements of individuals who have advanced human development. 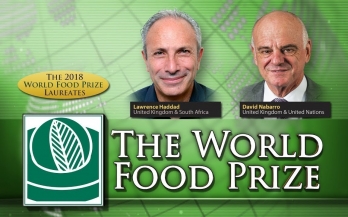