Gender inequality makes its mark early on in life in Pakistan.

We girls wore different clothes to the boys, I was sent to a girls’ school while my brother was sent to a boys’ schools. Although I did not like it, I was told this is the way the world was, and girls and boys have to go to separate institutions.
When I was a young woman commuting for work on public transport, I faced daily sexual harassment.

At the start of my career, in the 1980s, I worked in women’s rights organisations. I joined Women’s Action Forum – an independent forum fighting for women’s rights that started during Zia-ul-Haq’s regime to fight against the repressive laws against women; I also volunteered with War Against Rape in Lahore in 1992 as well as the Human Rights Commission of Pakistan. In the 1997-98, I also had the opportunity to manage a UNDP project facilitating women’s mobility in urban Lahore. We brought civil society groups together with very male-oriented institutions like the traffic police, the Urban Transport Department, and the private transporters’ associations to develop solutions to improve safety and security of women using Lahore’s public transport.

Today, I am on the board of a human rights and women’s rights organisation called Shirakat and am a member of MenEngage Alliance, which involves men in the gender equality struggle.

In Pakistan, gender inequality and its impact on malnutrition starts at childbirth. Despite some changing attitudes, even today, a girl’s birth is not celebrated. Females are not given the same attention as males. Girls’ diets are associated with certain taboos that mean girls are often not given nutrient-dense foods like meat and eggs regularly. This is associated with girls reaching puberty early, and parents fear that after puberty it becomes more difficult to keep their daughters safe from sexual harassment and men. Issues of girls’ protection are linked to family honour associated with girls’ sexual behaviour.

Farrah Naz, Country Director of GAIN Pakistan office, sits together in a meeting with Ariba Khan, an intern of the office.

Most egregious is that girls are often considered someone else’s property, whilst boys are considered a support system to their parents as they age. This results in boys being well-fed, educated, and prioritised. Conversely, in most households, women are the last ones to eat and sometimes, especially in poor households, women may not even get sufficient food to fill their stomachs. In a country where 67% of households cannot afford nutritious food, it is often women within those households who face the greatest disadvantage.

The impact of COVID-19 on women and girls in Pakistan

Globally, Pakistan ranks very low on gender equality. The pandemic has underlined this chasm and highlighted the share of women working within the informal sector in Pakistan – for example as domestic help, employed in small enterprises on daily wages, or owning small enterprises. Thousands of women-run micro-enterprises faced drastic income losses, especially during the lockdowns.

Women-owned microenterprises, which are usually smaller than their men-owned counterparts, have been 8% more likely to lose their entire revenue during the COVID-19 pandemic. What’s more, over a quarter of Pakistani women have been fired or suspended from their jobs in various sectors. With children at home during lockdowns, women are shouldering most of the care work, further reducing their economic opportunities.

I see gender-based violence, in all its forms – and the fear associated with it that saps women of their potential – as one of the most awful outcomes of gender discrimination. Sadly, gender-based violence has risen over the pandemic, both in terms of intensity and frequency. Support services for survivors have been disrupted – or where they have managed to continue, they haven’t necessarily been able to follow the right COVID-19 protocols. All of the above has affected women with disabilities, young women and transgender persons to a greater extent.

Disruptions have also hit hard in reproductive health services. Pre- and post-natal services have been affected especially due to community health workers not being able to continue to function due to fear of infection and lack of protective equipment.

The inspiration that spurs us on – choosing to challenge

The COVID-19 pandemic has made what was already a challenging road ahead, even harder. However, we will continue to fight for gender equality and choose to challenge. I draw inspiration from my father, who was a big advocate of women’s empowerment, and he has been my hero. My strong will to fight for equality, peace and justice also comes from my paternal grandmother, my paternal aunt and my mother, who were all very strong women in their own spheres.

My elder sister, Bilquis Tahira, has always mentored me in both professional and personal matters, counselled and provided support whenever it was required at any time during my life. There are several women in my professional life as my bosses, peers, and community leaders who inspire me as well. Not all of them can be named here, but they have played a role in shaping my thinking, learning new things, and applying them in my life.

The COVID-19 pandemic has made what was already a challenging road ahead, even harder. However, we will continue to fight for gender equality and choose to challenge.

This support has influenced and channelled my leadership style today. I believe in providing equal opportunities of growth and development to all, and am sensitive to issues that may hinder a woman’s full participation in work and her own growth. I strive to create an understanding of our personal biases among our staff, and try not to let any remarks go unnoticed if they are gender-blind or gender-insensitive.

I firmly believe that we all have a role to play in choosing to challenge gender inequality, wherever it arises. I look forward to a more equal Pakistan, for the young women riding busses to work in our cities, for the baby girls whose births go uncelebrated, and for the boys and men whose lives can only be enriched by a more equal tomorrow.

There are several women in my professional life as my bosses, peers, and community leaders who inspire me as well. Not all of them can be named here, but they have played a role in shaping my thinking, learning new things, and applying them in my life. 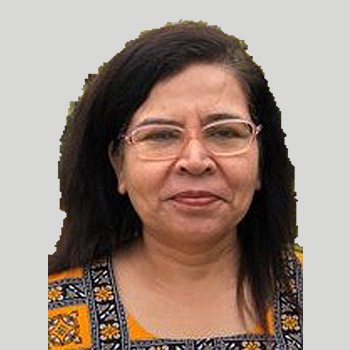