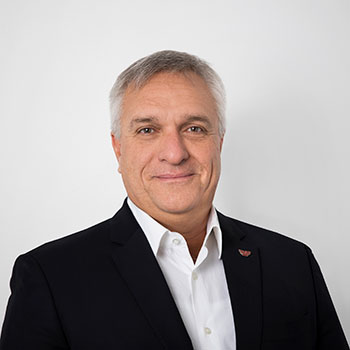 Mauricio has pursued his career within DSM since 1988, when he joined Roche Vitamins in the city of São Paulo as marketing and technical manager. In 1992, he was appointed Human Nutrition and Health Director of Roche in Mexico and, in 1998, he moved to Singapore as Human Nutrition and Health Regional Director Asia/Pacific, where he stayed until his promotion, in 2001, to Vice President of the Global Industry Unit Food Pharma, at Roche Vitamins’ headquarters in Basel, Switzerland.

In June 2010, Mauricio Adade took the position of Chief Marketing Officer of DSM at the headquarters in Heerlen. In this role, he was responsible for the programmes and innovations in the company's Marketing and Sales, leading the business units focusing on the customer centricity, thus increasing effectiveness toward improved businesses results.

Since March 2015, Mauricio is back to Brazil in the position of DSM Latin America President and Human Nutrition and Health Regional Vice President. In his current position, he is responsible for implementing regional strategies towards 16 countries in the regions, leading more than 2000 people.

Since 2 February 2016, Mauricio is the President of Global Malnutrition Partnerships and Programmes and Chairman of the Board of Africa Improved Foods, in Rwanda. The main responsibility is to actively develop and implement public, private, and other partnerships and programmes, effectively addressing malnutrition issues around the globe.