Chair of the GAIN Board of Directors 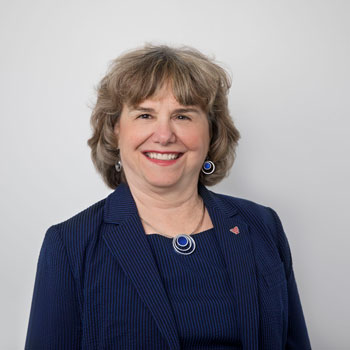 Catherine Bertini has a distinguished career improving the efficiency and operations of organisations serving poor and hungry people in the United States and around the world. She has highlighted and supported the roles of women and girls in influencing change.

She was named the 2003 World Food Prize Laureate for her transformational leadership at the World Food Programme (WFP), which she led for ten years, and for the positive impact she had on the lives of women. While in the US government, she expanded the electronic benefit transfer options for food stamp beneficiaries, created the food package for breast feeding mothers, presented the first effort to picture healthy diets, and expanded education and training opportunities for poor women.

More recently, she co-chaired a successful effort to impact American policy supporting poor farmers in the developing world. As a United Nations Under Secretary General, she initiated efforts to reform the global system for security of staff and for the recognition of all staff marriages. She interacted with all UN agencies and their leadership through a variety of UN bodies in humanitarian, development, nutrition, security and management roles, and led UN humanitarian missions to the Horn of Africa and to Gaza, the West Bank, and Israel.

With her World Food Prize, she created the Catherine Bertini Trust Fund for Girls’ Education to support programmes to increase opportunities for girls and women to attend school. Bertini’s career includes: Over twenty years in the private sector; thirteen years as a university professor; work with major foundations and think tanks; service in local, state and national governments; and board membership in a variety of organizations.

At the Maxwell School of Citizenship and Public Affairs at Syracuse University, she taught graduate courses in humanitarian action, post conflict reconstruction, girls’ education, UN management, food security, international organizations, and leadership. She served as a senior fellow at the Bill and Melinda Gates Foundation early in its new agricultural development program and she served on the jury for the Hilton Humanitarian Prize.

She has been honored by twelve universities in four countries with honorary degrees and by the Republics of Italy and Ireland. She has received multiple awards for her work to improve the lives of children, for her management of internal reform processes, and for her advocacy for women and girls. She was appointed to senior positions by three UN secretaries general and five US presidents.

Bertini now is a Rockefeller Foundation Fellow. Concurrently, she is Distinguished Fellow at the Chicago Council on Global Affairs. She is a professor emeritus at Syracuse University. She serves as a board member of the Tupperware Brands Corporation, the Stuart Family Foundation, and the Global Food Banking Network. She is an affiliated expert at the Lugar Center, a patron of Gender in Agricultural Partnership (GAP), an honorary advisor to the Global Child Nutrition Foundation, an advisory board member of the Scowcroft Institute of International Affairs at the Bush School of Public Service at Texas A&M University, and a member of the Leadership Council of Compact 2025 of the International Food Policy Research Institute and of the ACIES End Hunger Sustainably Program advisory board.

She is a fellow in the American Academy of Arts and Sciences, the National Academy of Public Administration, and the International Union of Food Science and Technology. She is a member of the Council on Foreign Relations and the Trilateral Commission.