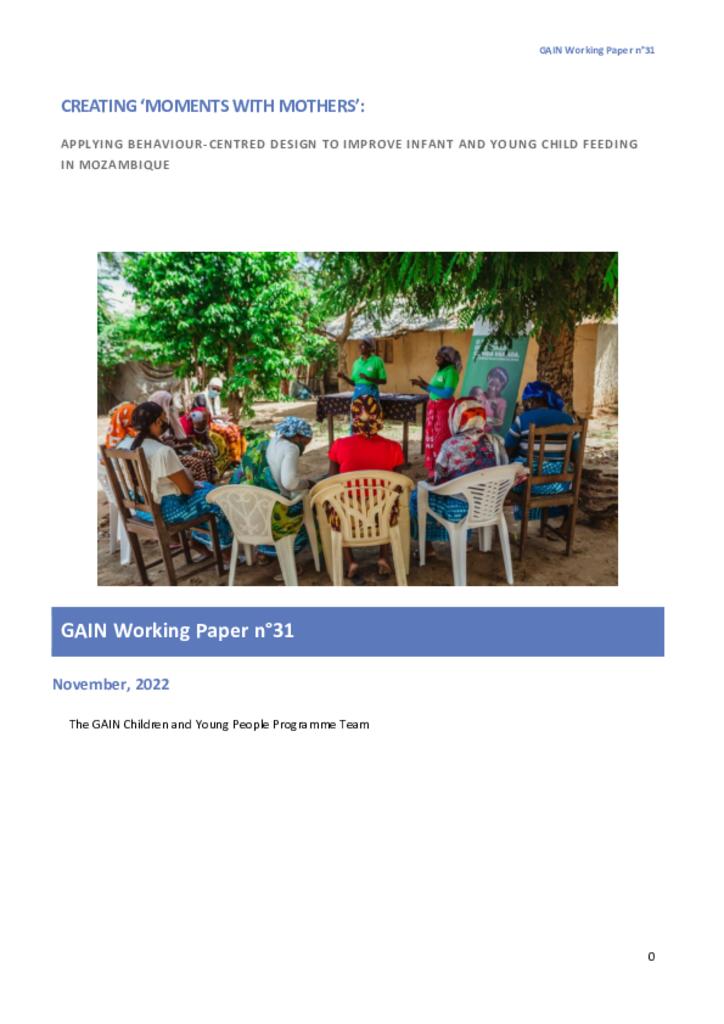 Improving infant and young child feeding (IYCF) practices is key for reducing the high burden of malnutrition in Mozambique. This working paper describes the application of the Behaviour Centred Design (BCD) framework to develop the 'Moments with Mothers' campaign, an intervention to improve IYCF practices supporting pregnant women, mothers, and other caregivers in Nacala Porto and Mossuril, Nampula province.

The BCD approach focuses on the emotional drivers of behaviour, rather than knowledge, to promote behaviour change. The framework’s five-step process – Assess, Build, Create, Deliver, and Evaluate – was used to conduct a situation analysis, develop a theory of change, identify key behavioural determinants, and implement the project. The core of the project is a series of activities called Emo Demos (short for emotional demonstrations). The emo demos brought mothers together and used games, song and dance, group discussions, and talks to promote early breastfeeding, exclusive breastfeeding for the first six months after birth, optimal complementary feeding practices, and improved hand washing techniques.

These were adapted from a project implemented by GAIN and partners in Indonesia and bolstered by a communications campaign and community mobilisation activities. An evaluation conducted after the 100-day pilot found that participants appreciated spending time with their peers gaining contextually relevant knowledge and skills that were valuable for their families and communities. The lessons learned from this pilot project and the earlier work in Indonesia informed the scale-up of the approach in Nampula province and its testing in Tanzania.