Read our seventh story in the series on The Food Crisis: What's Happening, a collection of work on the current events and the impact communities are seeing on a global scale. The Food Crisis is affecting everyone socially, economically and nutritionally. Joyce Akpata, Head of Policy and Advocacy at GAIN Nigeria, discuss the wide reaching ripple effect the economic crisis will have on Nigeria, affecting the most vulnerable in society, and what actions need immediate attention.

Nigeria is a food deficit country with high levels of undernourishment and food vulnerability . The World Bank has estimated that a decline in the number of hungry before the global financial crisis in 2008, has been followed by an increase in  the proportion of Nigerians below the minimum level of dietary energy consumption - 14.6% in 2019. These numbers have worsened, as evidenced by an increase by 3.9 percentage points between 2018 and 2019 alone then further increase to 28.3% in 2021.This significant increase has largely been on the back of the COVID 19 pandemic and heightened insecurity across the food production regions in Northern Nigeria, both of which impacted food production, the logistics of food distribution and increased levels of post-harvest food losses and waste.

The 2021 Global Food Security Index which ranks countries on the basis of food availability, affordability and food quality and safety, each of which have been heavily impacted by a complex interaction of growing conflict and insecurity, climate change and economic challenges had Nigeria listed as 97 out of 113 countries .We look at each of these challenges in turn. .

Northern Nigeria has traditionally been the food production basket of the country, accounting for over 70% of agricultural activity, but more recently has suffered huge displacement of its farming population on account of internal conflicts, with the abrupt cessation of farming in affected areas. An estimated  2.13 million people have become internally displaced from the North Eastern region and  8.7 million are now food insecure. The entire food system in the region is struggling and this has ramifications for Nigeria’s food system more widely.  Conflicts in the core maize producing states have stifled the distribution of maize to markets and resulted in huge post-harvest losses and waste. This has prompted a maize supply shortage

A combination of declining food production from the conflict regions and conflict induced migration to largely consumer based urban settlements in Southern Nigeria have significantly altered the food systems.. Imports of food staples have increased significantly. Nigeria, which was the top producer of maize in Africa in 2021 saw a 637% increase in maize import values in 2020. This is coupled with an unmet demand of livestock feed producers for maize and the drastic price increase in livestock farming input prices especially poultry, putting downward pressure on livestock supply.

Compounding the impact of increased volumes of imports, the ongoing Russian-Ukrainian conflict, has also impacted imported commodity prices. As at May 2022, the global wheat supply disruptions resulting from the Russian invasion had sent the average price per bushel of the three key wheat variants up by 165% per bushel and the price of flour has increased by nearly 150%. This price hike has also been transmitted into buckwheat which is a key input in local production of pasta and noodles, with Nigeria’s import bill for buckwheat rising 406%.

Nigeria is listed among the top 10 countries vulnerable to climate change, impacted by higher temperatures, flooding, landslides, gully erosion and drought. Over 3.2 million people have been impacted by extensive flooding in Nigeria since July, and over 600 people have died as a result. In 34 of the 36 states, there are more than 1.4 million displaced individuals. Floods have destroyed or damaged almost 569,000 hectares of cropland, further exacerbating the already grave food insecurity. Access to water is also a challenge as irrigation systems are proving inadequate to plug water supply gaps in increasingly arid regions especially in the North West and East. Pest migrations due to weather changes have also been on the increase with devastating consequences for farmlands especially in North Central region . Meanwhile, the high levels of post-harvest losses and waste are significantly impacting the country’s efforts to reduce greenhouse gas emissions and are contributing to growing landfills.

As climate induced desertification renders swathes of livestock pasture barren there has been increased migration of pastoralist livestock farmers (herdsmen) southwards. These pastoralists are increasingly coming into conflict with crop farmers, further increasing tensions and violence. Nearly 2,000 persons are reported to have died due to these herdsmen-farmer conflicts in 2018 alone . This number has multiplied as the conflicts intensify.

The Nigerian economy has witnessed a rapid deterioration. Purchasing power has plummeted with inflation rates hitting 19.64 per cent in July 2022.Fuel and food import prices have reflected global price surges but equally significant is the further deterioration in security and logistics infrastructure which has made the production and distribution of the most basic commodities more expensive. Foreign exchange shortages arising from severely negative balance of payments, dwindling commodity exports and fuel subsidies have also served to limit food imports and food processing inputs. The stage is set for stagflation with high unemployment, slow growth and galloping inflation. Higher prices should serve to incentivise food production, but a lack of functioning distribution infrastructure (roads, rail, seaports) means that any increase in production would effectively be lost. Exports are also being stymied by trade constraints, especially food safety related issues, imposed by EU countries on exports of primary goods originating from Nigeria.

What Can We Do Differently?

These challenges have combined to negatively impact Nigeria’s food system and the resultant price spikes have affected food affordability especially among the vulnerable population. With food inflation rising to 22.02 percent in July 2022 there is an urgent need for remedial action to address these challenges which threaten previous gains in poverty reduction and health status as calorie intake and nutrition are compromised.

While conflict resolution is central to addressing these challenges and strong political will, deliberate action and a firm commitment is needed to stabilise the economy to abate the main drivers of hunger, actions can be taken to increase the resilience of the food system.

Resolving access to land and water for all categories of farmers, access to foreign exchange and farm produce distribution infrastructure are irreducible minimums in providing stable food systems in Nigeria. Agricultural policies must be targeted at peasant farmers the major contributors to food production to support them in producing nutritious crops. Evidence also confirms the need for input fortification as a means of improving yields and resistance to climate changes, the adoption of new technologies (for example, soil conditions mapping and real time weather and farming information systems) and water management technology to address the climate related challenges.

Food quality and safety continue to suffer from lack of policy support (an issue which GAIN is working actively with several partners to improve), low literacy levels leading to low adoption rates for improved farming systems or inputs, and dysfunctional logistics and transportation system which constrains food preservation from farm to markets.

With Nigeria’s population estimated to be growing at an annual rate of 3.2% and projected to increase from the current 218 million people to more than 400 million by 2050 actions to improve resilience are urgently needed. With increased migration to urban centres which are expected to expand by 70% by 2050  food demand pressures will continue to grow and  reduced farm labour availability increasingly constraining food supply Actions are also needed transform food systems if all Nigerians are to be able to access and afford safe, nutritious food. 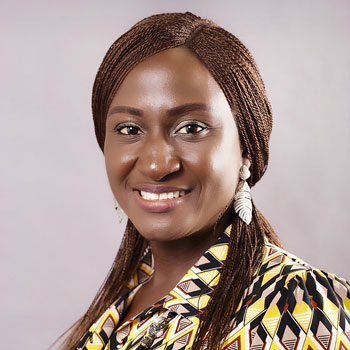 Joyce leads GAIN Nigeria’s wider influencing agenda and is responsible for ensuring that the interventions led by GAIN and by its different partners are coordinated so that overall project and policy milestones and goals are met.