Dairy consumption is a much debated topic among nutritionists. The World Health Organisation (WHO) recommends reducing saturated fats to less than 10 percent of total energy intake and reducing trans-fats to less than 1 percent of total energy intake. This recommendation is translated into “practical advice” to “replace” butter with oils rich in polyunsaturated fats and eat reduced-fat dairy foods, among other suggestions. But is this advice in line with the latest evidence, and is it appropriate for populations in Africa and Asia that currently have very low consumption of dairy products and may not find it easy to access to reduced-fat products?

A study published this month in the leading medical journal The Lancet casts doubt on the epidemiological evidence base for discouraging dairy consumption. The authors followed up, for an average of nine years, more than 136,000 individuals aged 35-70 years from 21 countries from five continents. They measured their diets using locally appropriate food frequency questionnaires and tracked their subsequent rates of serious heart disease and death from all causes. They found that dairy consumption was protective against both serious heart disease and death from all causes, and that this protective effect was particularly marked for whole-fat dairy. Milk and yoghurt both showed the same protective effect when analysed separately; cheese and butter did not show statistically significant effects.

Although this study was well implemented, epidemiologists tend to consider that randomised controlled trials provide more reliable data than observational studies. A previous meta-analysis of twenty relevant trials found no statistically significant changes in LDL (or HDL) cholesterol with increased whole-fat and/or low-fat dairy food consumption. In any case, as the authors of the recent Lancet article argue, it is probably not appropriate to judge the complex health impacts of whole food groups based on a single risk factor with limited ability to predict bad health outcomes. Rather, what matters is how consumption effects health across a range of relevant outcomes.

The impacts of changing your diet always depend on what diet you had to start with. While limiting full-fat dairy intake may, conceivably, make sense for populations eating upwards of 350g per day (the majority of the European/North American study subjects in the Lancet paper), it would not be sensible to apply such a recommendation to those consuming less than 150g per day (the majority of the African and Asian subjects in the same study). It is also important to bear in mind that even some populations with very high levels of dairy consumption in these geographies—rural families in Rajasthan, for example, or cattle-rearing nomads in Africa—may have no viable options to obtain high-quality protein and micronutrients if they were to reduce their dairy consumption.

And dairy consumption is unquestionably important for particular vulnerable groups: Dror and Allen (2011) have shown that “among undernourished children in developing countries, … milk… intake improved growth indicators, micronutrient status, and cognitive performance, with fortified milk superior to unfortified milk in reducing the prevalence of anaemia. Improvement in iron status was also achieved by fortified-milk interventions among iron-deficient or anaemic children in developed countries. Interventions with milk and fortified milk were culturally acceptable and well tolerated across study populations”.  These benefits of milk consumption must be weighed carefully against the risk of potentially displacing breastmilk (in infants and younger children) and the environmental costs of livestock raising (a balancing act attempted in a recent CGIAR-led report which GAIN participated in a consultation on). Dairy production is roughly an order of magnitude more environmentally friendly than beef production, on a calorie-for-calorie basis, so it is important to avoid a knee-jerk reaction that dairy production is a global bad regardless of where it happens and for whose benefit. The trade-offs are difficult, as they involve weighing up current benefits versus future harm, and the interests of different people in different parts of the world.

At GAIN, we support the dairy value chain in various ways. In Africa, we work with medium-sized local dairies: we are involved, in Ethiopia and in Zambia, in two projects to develop affordable and healthy fortified yoghurt products suitable for older children and adolescents, and in Kenya we have supported the scaling up of the “milk ATM”, which we see as a great tool to encourage the sale of cheaper, safer milk. In India we support the fortification of milk with vitamins A and D in 18 states (including the Union Territory of Delhi). We hope to expand this portfolio in the future, as we promote a nutritious, safe, and diverse diet for all people, especially the most vulnerable. 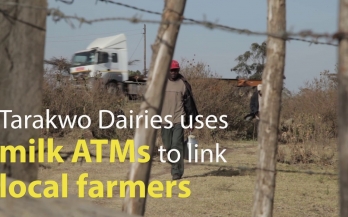