Last week GAIN awarded the outgoing Director General of the Food and Agriculture Organization (FAO), Dr Graziano Da Silva, the 2019 Nutrition Inspiration Award. When looking back at Dr Da Silva’s tenure at FAO it is surprising at how revolutionary it has been.

Unlike some others in our field, Dr Graziano has grasped that the world of hunger and nutrition is rapidly changing and he has equipped FAO to address those challenges: from undernutrition to malnutrition in all its forms; from a duopoly of government and donor action to a plurality of stakeholder actions; from keeping climate and nutrition separate to seeing them as inseparable; and from focusing largely in the rural areas to focusing on both rural and urban linkages. He has seen FAO through the transition from the MDG to the SDG era and he has done it in a way that has positioned FAO to meet the challenges that we all face: stunting falling, but not fast enough, wasting static and too high, anemia in women too high and falling much too slowly and overweight and obesity rising catastrophically in nearly all countries.

We should not be too surprised at Dr Graziano’s strong and visionary leadership of FAO. Back in December 2010, in the throes of the election for the FAO Director General (DG) position, a position that Dr Graziano would go on to win, I wrote a blog that listed 5 things that we would want to see in the next FAO DG. How did Dr Graziano measure up?

He is not an attention seeker. He just seeks attention for anti-hunger efforts. He empowers people to get on with things.

1. A track record of leadership in hunger reduction.

The member states picked a leader in Dr Graziano who certainly had a track record in this area. He was an Extraordinary Minister for Food Security & Senior Advisor to Brazilian President in Brazil 2001-2006. During this time, the hunger rate in Brazil decreased from 10% to 2%.

2. An understanding that hunger cannot be tackled by agriculture and food alone, but that agriculture’s prime focus should be hunger reduction.

FAO’s Zero Hunger programme is a good example of this nuanced thinking because it deals with the short term solutions to hunger and nourishment such as through cash transfer programmes and the more structural issues of agricultural and food system transformation such as reshaping agricultural research and development, road and market infrastructure, food system polices, incentives and regulations and consumer demand creation. Moreover, these changes were identified through technocratic analysis but delivered within the context of social movements which is hard to finesse.

Unlike some others in our field Dr Graziano has grasped that the world of hunger and nutrition is rapidly changing and he has equipped FAO to address those challenges. © FAO/Giulio Napolitano

3. A willingness and ability to form alliances and coalitions with familiar and unfamiliar partners.

The DG has been very strong here, with alliances with the International Rescue Committee, parliamentarians, and the private sector (e.g. Google and Rabobank). This is evidenced by the State of Food Insecurity Report (SOFI). Not too long ago this report was seen as an FAO report, then it became a Rome Based Agency report and now it is put together by the big 5 UN agencies. One set of data, one set of messages, one set of efforts.

4. The boldness to set up systems to hold her/himself – and FAO – to account.

I think the boldest thing that has been done by FAO in the metrics area is the adoption of the Food Insecurity Experience Scale (FIES) which measures people’s perceptions of food insecurity at the individual level, but done in a very rigorous way, with quite inconvenient results for some key FAO stakeholders. This is brave. FAO has also decentralized somewhat in this time period and that is also important for greater accountability to the governments and people living in the countries where hunger is most devastating.

5. A willingness to speak out on hunger.

Dr Graziano has several accomplishments here. On assuming the DG role he set up the first dedicated Office for Corporate Communications. That is the minimum. Then he solicited the help of Nobel Peace Prize Laureates, supporting them to speak out on the vital but underappreciated links between Food Security and Peace Building. Finally, Dr Graziano has been clear about the role of the private sector. For example he has said "the private sector plays a crucial role in promoting responsible investments in agriculture". Of course it does. We cannot pretend otherwise, but it is not always comfortable to say that.

We know the inherent limitations in the UN system where freedom of manoeuvre is constrained by the speed of the member states, and by heavy bureaucracy. So given all this, why is it easy to be surprised by Dr Graziano’s accomplishments? Because he is – for a leader at his level – quite humble. He is not an attention seeker. He just seeks attention for anti-hunger efforts. He empowers people to get on with things. The member countries understood this and it is no surprise that in 2015 he was re-elected to his post with 177 member votes – the broadest consensus ever for an FAO DG election. As David Nabarro said to him at the conclusion of last week’s event “you have made history”. Quite.

So Dr Graziano will be a tough act to follow for the incoming DG Qu Dongyu who takes up the post in August. He comes with an excellent reputation, much to build on from his predecessor’s tenure, and a strong ecosystem to draw on. It is time for him to now make his own history – to make hunger history by 2030. 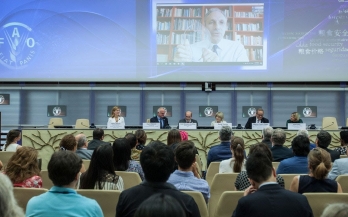